More on Theistic Atheism & Other Essays 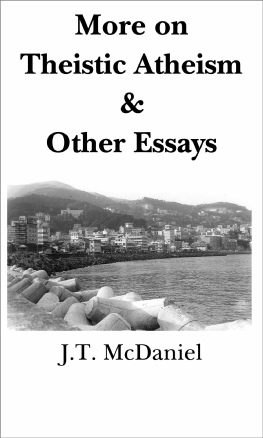 Continuing a theme begun in This and That, J.T. McDaniel now presents a collection of 19 essays, ranging from the titular More on Theistic Atheism, to Odd Animals and Space Aliens. In the first the author further develops the idea of an atheism that includes a deity (if admittedly an imaginary one). While the idea that, “It’s okay to believe in god, as long as you realize it’s imaginary” essentially defines theistic atheism, most of the other essays simply dispense with the idea of any reality beyond the physical.

Along with appeals to logic and critical thinking, essays cover such topics as gay marriage, abortion, climate change, the relationship between government and religion, and between religion and science. On the lighter side, McDaniel examines some reasons why the world is unlikely to end in 2012 (which it obviously didn’t, so he was right), the music he wants played at his funeral (Queen, Andrew Lloyd Webber, Boito, but definitely not Amazing Grace), and the possibility of actual immortality in a virtual world.

There is a suggestion that a new political party might be in order. Climate change is viewed through a practical lens, which suggests that far more could be accomplished through the use of tax incentives than the usual government instinct of using any crisis as an excuse to wring more funds out of the taxpayers. The use of existing infrastructure to produce cheap hydrogen is also studied.

The collection concludes with a look at cryptozoology, which the author finds valid mostly in the realm of insects and fish, but not Bigfoot or Mokèlé­­-mbèmbé. He then argues that space aliens are probably real, but that it’s unlikely they have visited here, or that any extraterrestrial civilization would even know we’re here.