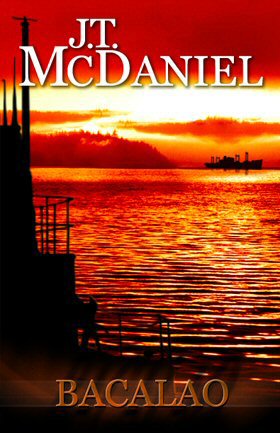 “Bacalao is an impressive and exciting novel of undersea warfare that follows an American attack submarine from the moment its keel is laid and on into the deep, blue Pacific Ocean to do battle against the Japanese Empire. Her commander and crew are individuals we come to respect, even worry over. The Bacalao also becomes one of those individuals, a steel spirit with a great heart and persevering soul. J.T. McDaniel, an authority of World War II submarines, is a terrific writer who has created a classic of wartime adventure. Heartily recommend.”

"...the best World War II submarine novel since Edward L. Beach's Run Silent, Run Deep… McDaniel must join top naval authors such as Edward L. Beach and Douglas Reeman. His book will certainly occupy a special place on my shelf of naval fiction [and] should become a classic of submarine [fiction]."

"J.T. McDaniel takes the helm with the steady hand of a master at the top of his game, creating an accurate and fascinating depiction of daily life aboard a diesel attack submarine in the 1940s. From the builder's yard in Connecticut, to white-knuckle combat in the Pacific Theater, to the heart-pounding thunder of exploding depth charges, every detail rings with authenticity. McDaniel writes with the technical precision of Tom Clancy, the pacing of Michael DiMercurio, and the human comprehension of Edward L. Beach. A reader simply cannot ask for more."

Jeff Edwards, author of Sea of Shadows, The Seventh Angel, Sword of Shiva

When Lieutenant Lawrence Miller first sees U.S.S. Bacalao, the new Gato class submarine is little more than a pile of curved steel plates stacked up alongside the building ways at the Electric Boat Company in Groton, Connecticut. Over the next few months Miller watches the boat take shape, while the crew gathers from throughout the fleet.

By late 1941, Bacalao is in commission and attached to the Pacific Fleet in Hawaii. Then, on a Sunday morning, everything changes as the Japanese sneak attack plunges the United States into World War II. The new submarine and her untried crew are immediately thrown into action against the Japanese Empire.

And Miller is there through it all, from the disastrous first patrol, when the boat is nearly lost and a pair of surprising heroes emerge, to the deployment to Australia, where a chance encounter ashore will change his life forever. Then, after spending a year in command of an antiquated S-boat in the frozen hell of the Aleutians, Miller returns to Bacalao as her final wartime commander.

Written in a simple, straightforward style, and with careful attention to historic and technical detail, Bacalao has become an instant classic of submarine fiction.