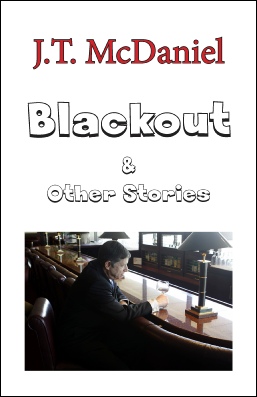 An eclectic collection of short stories by the award winning author of Bacalao and With Honour in Battle, Blackout & Other Stories has a little something for every taste. Three of the sixteen stories have never previously appeared in print.

The stories range from the hard boiled title story, to more of McDaniel’s popular submarine adventures, to ancient civilization fantasy, strangely civilized, and to not so civilized vampires, and even a bit of science fiction. Here you’ll find demigods and vampires, cabala and murder, fleet boats and u-boats, unbelievable “true stories” that never happened, and a very unusual duel between a battleship and a carrier task force.

Blackout. Jake Holden is sitting in a bar, trying to remember if he murdered his wife. He doesn’t remember much of anything from last night. His wife is certainly dead, in the same bed as his next-door neighbor. But he can’t remember if he did it? And, well, what should he do now?

Eighteen Hours. An American submarine, on what is expected to be a routine, pro-forma patrol off the Atlantic coast, encounters a German u-boat. The two boats will spend the next 18 hours submerged, each trying to gain the advantage, both knowing that the first to surface will almost certainly be torpedoed by the other. Both are running out of breathable air.

Element of Surprise. A Gehunite Empire story. Battleships are obsolete in an era of naval airpower, but midnight finds the Dushlin on a training cruise. No one expects are war to break out. When it does, Dushlin finds herself only a few miles from the enemy’s carrier task force. Should she attack? Stand clear and vector air cover onto the task force? For Captain Ehno Karnamo, there can really be only one choice.

Survivor. When the Japanese torpedo his ship, Jim Jenkins finds himself swimming in the Pacific. There isn’t enough room for everyone on the rafts, and sharks have been attracted by the sinking.

The Collinsville UFO. A “true mystery” story. In 1847, a mysterious flying object appeared in the sky over the little Indiana town of Collinsville. A report in the local paper gave the details. In modern times, an investigator calls up the reincarnated spirit of one of the original witnesses to fill in the details.

Conflict of Interest. Susan is on the school board. Her pastor wants her to help him get Harry Potter removed from the school libraries and reading lists. She likes her pastor, but can’t see anything wrong with the stories. And there may be something else.

Skagerrak. A prequel to With Honour in Battle, telling what happened as U-702 is making her way back to Kiel and encounters a British killer group in the narrow waters of the Skagerrak.

A Big Disappointment. A professional baseball player tells what happens when he’s called up from the Indians’ AAA farm team not to Cleveland, but to a new expansion team in Florida. He’s in the show, but his mother is a die-hard Cleveland fan, and now his new team is in the American League playoffs against the Indians, with playing in the World Series quite possibly up to his next at bat.

Memoir. An ancient vampire, once a Roman soldier, tells the story of his life, and what happens when a gang of burglars decide to break into his secluded home. Everyone is in for a surprise.

The Life of Salmik the Great. A Gehunite Empire story. Salmik the Great was the founder of the Gehunite Empire. Naturally, his life story contains a few mystical elements, such as being a demigod, and falling in love with an ancient crone who was restored to youth and beauty after showing a kindness to an old beggar who proves to be a god.

Mort’s Maid. Cousin Mort is rich, and lives on a huge estate. His only servant is a beautiful, mute maid called Yvette, who never seems to change, or age. Now developers are after his land, and they’re not the sort who’ll take “no” for an answer.

Predator. He’s a man who senses things. Who knows when a woman is inferior, and needs to be removed from the gene pool. He’s culled many in the past. His senses now tell him that the beautiful redhead walking a few paces ahead should be next.

A Patient Man. A funeral director, on his deathbed, talks about his problems with his employer’s disgusting son. It’s been years since anyone saw the young man, however, and things have been okay. Now that he’s dying, he decides it might be time to explain.

Castle Grosshelm. A squad of German soldiers, prisoners of war in a post-war world, are employed as slave laborers by a Russian team intent of digging up a treasure rumored to be hidden in the depths of a ruined Romanian castle. When the treasure is found and removed, including a huge gold cross that had been placed in front of the door to the castle’s crypt, the Russians discover that gold wasn’t the only thing buried in the castle.

Mission Twenty-Five. Twenty-five mission was the goal in the Eighth Air Force. Survive 25 missions and you got to go home. Most crews didn’t manage to pull it off. Here, the bombardier on a B-17 relates what happened on his own final mission.

Return to Duty. A Gehunite Empire Story. Commander Julia Maniah is returning to her command, the submarine Warrior, which has been in dock undergoing a refit. On the way to the base, she’s called upon to rescue the victims of a gas explosion in a dependent housing unit. As if that’s not enough, no sooner has she returned to her boat than an Arzucaldan surprise attack devastates the base.