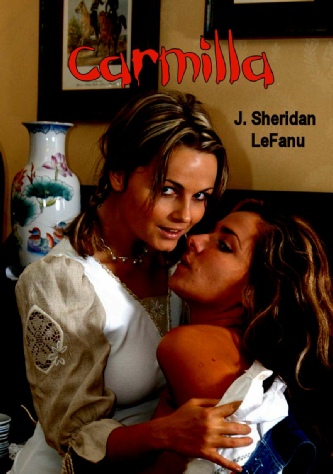 Carmilla is one of the earlier vampire novellas, told in the form of a first-person memoir. Originally published in 1871, some 26 years before Bram Stoker (who once worked for LeFanu) presented Dracula to the world, Carmilla naturally follows older vampire traditions previously established in folklore and in such prior works as Polidori’s The Vampyre, or Prest’s Varney the Vampire. Not the least of these is that the beautiful vampire is unaffected by sunlight. (The sunlight vulnerability actually didn’t appear before Murnau’s film, Nosferatu, in 1922.)

Though certainly not quite as implicit as in Hammer Films’ 1970 film version, The Vampire Lovers, the lesbian theme is certainly present in the original book. This was, after all, written in 1871, when you didn’t really talk about such things. Just the implication was sufficient. Carmilla’s obvious obsession with the young narrator, Laura, is clear enough.

As a small child, Laura was disturbed by weird dreams of a beautiful but frightening lady. Now a beautiful young lady of 19, she is astonished to find that a girl of her own age, the lovely Carmilla, a temporary resident in her father's Styrian castle after a carriage accident, seems to be the exact image of the woman in her childhood dream. The two grow close, but there is something about the beautiful guest that Laura finds disturbing. Perhaps it is the way she expresses a love for her hostess that seems more erotic than platonic. Or it may be her seeming distaste for the religious, or her utter indifference to a strange plague, which only seems to kill young women, affecting the region. Then Laura begins to have those dreams again, and her health starts to decline. Will she become the next victim of the strange plague? Is there a significance in Carmilla's shockingly exact resemblance to the subject of an ancient portrait? And what will Laura, her father, and a grieving General Spielsdorf discover in their exploration of Karnstein Castle's mouldering chapel?

Our digital edition is carefully edited and annotated. Published by CEB Pubs.