Up From the Deep: The Return 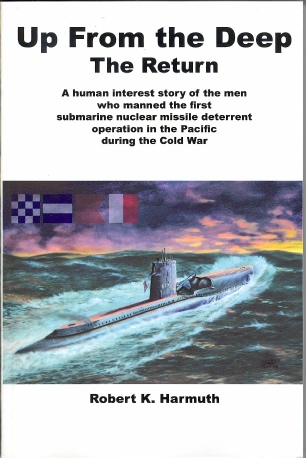 ”Up From the Deep: The Return is about a great, dedicated submarine group of sailors, who against great odds helped keep the Russian Bear in its cage during the cold war.”

“This book explains how the Navy conceived its first nuclear cruise missile, Regulus, and modified many WWII submarines during the development and testing at its new Pacific Missile Test Range at Point Mugu, CA. By 1959, Regulus armed missile boats were deployed in the North Pacific until relieved by the Polaris Missile System. Utilizing diplomacy and deterrence, President Kennedy forced a Soviet withdrawal of cargo ships from Cuba and the ‘deterrence by nuclear weapons’ had been born.”

Captain Grayson Merrill, USN (Ret), conceived the missile design and became
known as “Father of Point Mugu” where the missile was tested.

From 1959 to 1964 a handful of American submarines armed with the Regulus cruise missile provided a forward deployed nuclear deterrent for the United States. Today only USS Growler (SSG-577) remains, docked in New York City at the Intrepid Air, Sea and Space Museum, and open to the public.

Author Robert K. Harmuth served as an officer in Growler during her final patrols. Adding personal experience to the recollections of other crew members, and the officers and men who developed and served in the Regulus program, Harmuth has produced a fascinating book that combines a memoir with a highly personal history of the first submarine based nuclear force.