The Annotated, Exposed and Debunked Edition 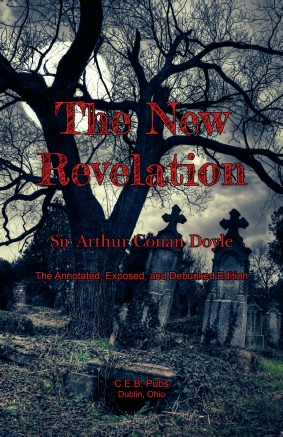 Sherlock Holmes creator, Sir Arthur Conan Doyle, was trained as a physician, specializing in diseases of the eye. There apparently wasn’t a huge demand for ophthalmologists in late 19th century London, so Doyle turned to writing to fill his spare time. Before long, he’d created Holmes, and eventually the writing quite displaced the medical.

Curiously, while Sherlock Holmes was a thoroughly rational individual, Doyle himself became increasingly convinced that there was truth to be found in the supernatural. One result was this 1918 book, in which Doyle recounted numerous psychic events. He was a convinced Spiritualist, and somehow the skeptical mind with which he had endowed Holmes utterly deserted him here.

Doyle’s text is all here, but has been supplemented by a plethora of notes that help to reveal the personalities discussed, and the trickery that was used to accomplish their seeming communication with the “spiritual” realm. Arguably, the notes and Afterword actually make up the largest part of the book.

If you just want to read what Doyle had to say, you are obviously free to ignore the notes. If you want to know what was really going on, then and now, the notes are there to explain.