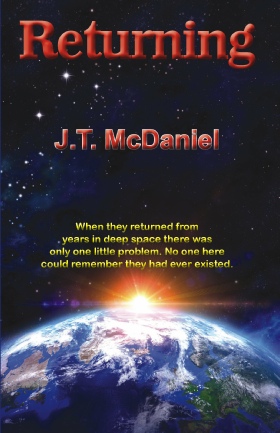 “Returning is part fantasy, part science techie, part political drama—and great storytelling. It begins with a diverse crew preparing to leave their home planet of Barzak in a very special starship named Warrior. Most of the action, however, takes place 86,000 years later, when they go home for a visit. Exotic, well-written, and captivating. I didn’t expect to love Returning quite so much. It made me laugh, and it made me think. Isn’t that the point of literature?”

Joyce Faulkner, award-winning author of Vala’s Bed, Windshift, In the Shadow of Suribachi, and USERNAME

“A brilliant twist on the classic first contact scenario. Imagine the kind of pulse-pounding adventure you’d expect from a Jack Campbell novel, wrapped around an incredibly clever idea. J.T. McDaniel has created that rarest of all things: a thought-provoking novels that also pure page-turning fun.”

By 2126, much has changed. There is an Earth colony thriving on Mars. The massive Hawking Stellar Array, a huge space telescope functional in all spectra, visible and invisible, is looking farther into the universe than ever before possible. The Sagan Space Platform orbits the planet at 400 kilometres. In the realm of space exploration, though still limited to the solar system, the United Kingdom has been the leader for many years.

That leadership is seriously challenged early in the morning of 2nd April, when a massive energy discharge is observed out beyond Saturn’s orbit. This proves to be a giant starship, emerging from “jumpspace” into normal space. The 5.2-kilometre-long ship, travelling at a seemingly impossible speed, covers the distance from its entry point to earth orbit in only a few hours and parks itself next to the space platform. And there it sits, silent and vaguely foreboding.

In the UK, officials wonder if the planet is about to be visited by aliens. In Russia, the same question is asked, though “invaded” is used more often than “visited.” In the US, however, the arrival is hardly mentioned at all, and then mostly dismissed as some sort of British hoax. This, despite a 15-year-old girl in Denver having unknowingly scolded the starship for broadcasting a voice message on a code-only Ham radio frequency, and the rather obvious fact that the ship is so big it can be seen from the ground.

Then the truth is revealed. The starship isn’t visiting earth, it’s returning to earth, where it was built nearly 87,000 years ago, the product of an advanced technological civilisation that vanished so completely that no one in the modern world had even a clue it had ever existed. The returnees are generally friendly, though Earth’s technological regression requires they now treat their home planet as a developing world, from which they are bound to withhold any technology that doesn’t already exist there. They’re generally welcomed, except in the United States, where visitors from 87,000 years ago conflict with a strict legal policy declaring the earth to be no more than about 6,000 years old.