The Sixth Victim & Other Plays 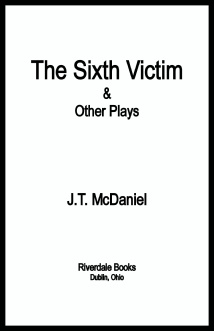 Presented here is a collection of five short plays by Coming Out author, J.T. McDaniel. This collection includes: The Sixth Victim, To Kill a King, Burying Dad, It’s the Computer’s Fault, and Sunday Afternoon, treating on subjects as diverse as Jack the Ripper, a family dealing with incipient Alzheimer’s, an obsessive murderer, Claudius’ reasons for murdering his brother, and issues with a departed parent. All of these plays have a running time of an hour or less, and most need only small casts.

The Sixth Victim & Other Plays is available in print, Kindle, and audiobook editions.

The Sixth Victim: It is 1888, two days after the murder of Mary Kelly, officially the fifth and final victim of Jack the Ripper. An attractive, red-haired prostitute, Dina, brings a Man to her lodgings. Things he says make her suspect he may be the Ripper, but she doesn’t seem to care, even suggesting that she wouldn’t mind being dead. Ultimately, he pulls out a knife, revealing that he is, indeed, Jack the Ripper. Unfortunately for him, it turns out she was telling the truth when she claimed to have attempted suicide six centuries in the past.

To Kill a King: A prequel to William Shakespeare’s Hamlet, To Kill a King places the action in 1066. Hamlet’s father is still alive, and the prince’s relationship with his Uncle Claudius is actually rather close. As the story unfolds, it becomes clear that old King Hamlet was hardly the paragon his son believed. Publicly close, the king privately detests his wife, strongly suspects that his brother is Hamlet’s real father, and enjoys nothing quite so much as going off to war. He’s also a lot closer to Osric than one might expect. Things come to a crisis when the king hires a professional assassin to murder his wife, and his brother acts to prevent this, then takes drastic action to preclude further attempts. Because of a secret codicil to King Hamlet’s will that declares his son a bastard, Claudius becomes king, after swearing the Royal Council to secrecy. His marriage will not only unite him with a woman who has secretly loved him for thirty years, but also legitimize their son. He doesn’t consider the possibility that his brother’s ghost might decide to take revenge on all of them. Written in blank verse, with a running time of just under an hour. Would make a wonderful addition to any Shakespeare festival.

Burying Dad: Brother and sister Joe and Mary are in a visitation room at the funeral home, with their dead father in a flag-draped casket. While they wait for his friends to show up for the funeral, they talk about their father, his effect on their lives, and about themselves. Joe is a retired Army general; Mary is still teaching elementary school. A good two-person play for older actors.

It’s the Computer’s Fault: A monologue play with a cast of two. Rod is a farmer, very OCD, who takes things such as Internet personality tests as divine communication. So when one such test suggests his personality matches that of Ed Gein, the cannibalistic murderer who inspired such fictional characters as Norman Bates (Psycho) and Buffalo Bill (The Silence of the Lambs), he natural kidnaps Lucy, a teenage waitress at his favorite diner, brings her back to his home, and proceeds to explain just why he’s going to have to kill her and eat her. Only Rod speaks; Lucy is tied to a chair and gagged throughout.

Sunday Afternoon: After 45 years of marriage, Dave is starting to lose himself, and Norma, his wife, is naturally worried. He gets lost going to a supermarket half a mile away, forgets that he stopped smoking 40 years ago, and is generally having problems. He loves his wife, but doesn’t tell her anymore because he forgets that he didn’t do it. He can’t remember which of his daughter’s children is oldest, or whether his son is still alive. This one-act play tells what happens on a particular Sunday afternoon when his wife and daughter may be forced to confront the situation.

The plays in The Sixth Victim & Other Plays may be licensed individually, or in combination. To apply for a license, click here.

Buy the audiobook from Audible.com or iTunes.