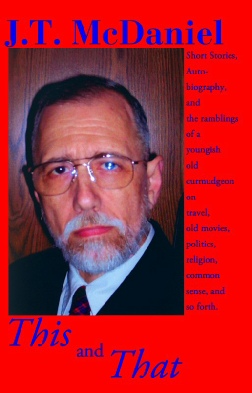 What do you get when you combine 13 short stories, events from an author’s life, and the philosophical musings and rants of a youngish old curmudgeon? You get This and That, the fascinating new must read book from popular novelist and historian J.T. McDaniel.

In the autobiographical section, McDaniel decided to limit things to only the interesting parts, including his military service in Viet Nam and Japan, a musicless high school musical with a future Broadway actress, Fiddler on the Roof with a future Transformer as Tevye, and the strange tale of Sebastian Cabot’s arse.

The final section is filled with blog posts, essays on old movies, bad movies, car, planes, trains, vampires, Madeline Smith’s breasts (lovely), Steve Reeves’ voice (just fine, actually), politics, how you can be Conservative without being superstitious, and the principle of Theistic Atheism. Just to round things out, stops are also made in the realms of conspiracy theory, cults, and alien abductions.