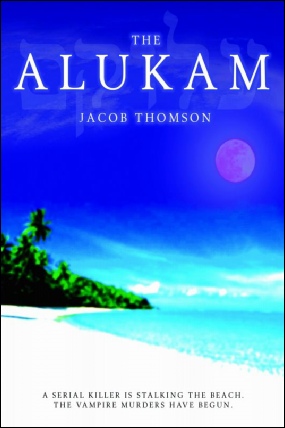 ”Thorough, committed research and descriptive scenes of sex and murder propel this novel to the top of my favorites list. The Alukam is a book I recommend to all lovers of murder mysteries.”

“[This] book will certainly satisfy the lovers of vampire fiction, adding an entirely new chapter to an already huge vampire mythology and at the same time will intrigue the mystery lovers with its realistic approach.”

From seventeenth century Poland to 1993 Florida, this fascinating novel seamlessly combines the matter of fact style of a police procedural with the horror and eroticism of  the vampire. Drawn from obscure stories in the Jewish mystical tradition, The Alukam presents an entirely new type of vampire–one unaffected by crosses, sunlight, or any of the traditional remedies, and who can rest in his coffin only the Sabbath.

In July, 1993, Benjamin County Sheriff’s Detective David Schneider encountered the first in a series of bloodless corpses. It didn’t take long for the local newspaper to start writing about a “vampire serial killer,” or for the county commission to give the sheriff additional headaches. Schneider’s only lead, a wealthy resident of Port Morrow Beach who bore a striking resemblance to the detective, and was apparently a distant relative, couldn’t really be tied to any of the murders. And the FBI wasn’t helping much, for while they suspected this string of murders were connected with others, the earlier killings went back to well before Schneider’s suspect was born.

Everyone was sure, when all the evidence was in, they’d find a lunatic who entertained delusions of being a vampire. It never occurred to them that their serial killer might be a real vampire, and the string of deaths went back not a few decades, but over 300 years.