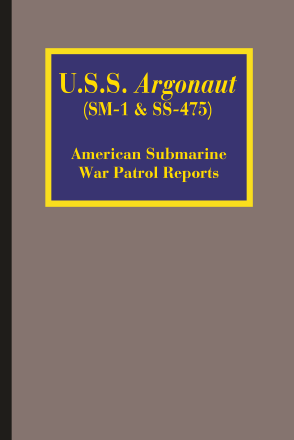 During World War II, the United States Navy employed two submarines named Argonaut on operations. The first was a giant mine layer, designated SM-1. Built in the 1920, the first Argonaut made three war patrols, the first, off Midway, having started before commencement of hostilities on 7 December 1941. The full reports for her first two patrols are included. Because she was lost with all hands during her third patrol, no official report exists. A short article is included covering what is known of this patrol, along with a full list of those lost.

The second Argonaut (SS-475), was a Tench class fleet type submarine, built by the Portsmouth Navy Yard (now Portsmouth Naval Shipyard), and commissioned in 1945. She made only one war patrol before the Japanese surrender brought the war to an end. The official report of that patrol is also contained in this volume. The second Argonaut survived into the 1970s, spending her final years in Canadian service as HMCS Rainbow.