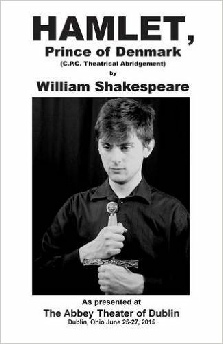 Not everyone wants to sit through a four-hour, unabridged presentation of William Shakespeare’s Hamlet. This two and a half hour abridgement has proven an ideal starting place for a company wanting to do the classic play in a faster-moving, streamlined version that keeps the action going and the audience attentive.

Originally conceived for the 2015 CPC Theatrical production at Dublin, Ohio’s Abbey Theater, this version eliminates repetitive scenes, and drops some characters. Fortinbras is gone, and consequently so are Cornelius and Voltimand. Roscenrantz and Guildenstern, whose main contribution has always been about 45 minutes of tedium, are also gone. The first scene on the castle ramparts, which is described in considerable detail ten minutes later, has likewise been cut, as it was in most 19th century productions. For the play within the play, the dumb show is retained, while the overblown spoken repetition is not.

Of course, the essential revenge plot remains, as does the dramatic duel at the end.

The Abbey Theater production ran an average of 2:40, with a 15-minute intermission. This is an ideal version for schools and community theaters. Using the doubling from the CPC Theatrical cast list, this version may easily be produced with only 10 actors.

No license is required to produce this version, but we do ask that you buy sufficient copies for your cast and crew, as photocopying is strictly forbidden.