The Sixth Victim & Other Plays, by J.T. McDaniel 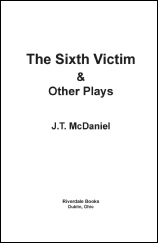 A collection of five one-act plays, The Sixth Victim & Other Plays is our most recent publication. These short plays cover such themes as the depredations of Jack the Ripper (The Sixth Victim), a blank-verse prequel to William Shakespeare’s Hamlet (To Kill a King), sibling relationships with a difficult father (Burying Dad), an OCD murderer and cannibal (It’s the Computer’s Fault), and a family facing a possible Alzheimer’s diagnosis (Sunday Afternoon).

Coming Out, by J.T. McDaniel 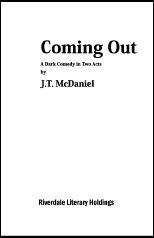 This fascinating dark comedy about an atheist philosophy professor, his televangelist son, his coming-out-today other son, wife, and mistress, premiered at the Abbey Theater of Dublin, Dublin, Ohio, on October 4, 2013. This one-set play can be staged fairly simply, and requires a cast of five men and four women.

Available in two print editions (Reading and Acting), and a Kindle edition. 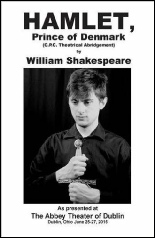 This abridgement of William Shakespeare’s classic tragedy was commissioned for the 2015 CPC Theatrical production, and cuts the usual four-plus hour play down to around two and half hours. Some characters and scenes are obviously gone from this version, including Fortinbras, Cornelius and Voltimand, one of the grave diggers, and, most notably, Rosencrantz and Guildenstern.

This version is ideal for school or community theater productions, and with some doubling can be easily performed by as few as nine actors. Our version has also been used as a starting point for other productions, which then added or cut other material to fit the director’s vision.

Available as a 5.5x8.5 inch trade paperback only.

No performance license is required. Please note, however, that if you intend to perform this version, you are required to purchase a sufficient number of scripts for everyone, as photocopying is strictly forbidden.

A complete edition of Shakespeare’s historical play is currently in preparation, and is expected to be released sometime in 2016. This will be available in a 5.5x8.5 inch trade paperback edition.