With Honour in Battle
J.T. McDaniel 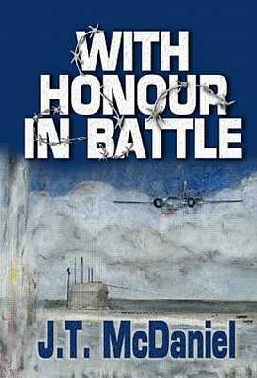 "I have to say I really enjoyed it."
Edward L. Beach, author of Run Silent, Run Deep

"The characters are finely drawn and face the dilemma of killing as a duty while deploring the act itself. The action is suspenseful; the battles realistic. This is the best naval warfare book I have read in a long time."
Barbara Buhrer, myshelf.com

As 1944 draws to a close, Korvettenkapitän Hans Kruger is Germany's top-scoring u-boat "ace" still at sea. After five years in the hell of the North Atlantic war, Kruger is exhausted and close to the breaking point. He knows that Germany will inevitably lose the war, yet his sense of duty compels him to continue going to sea in a futile effort to delay the inevitable.

Returning from a particularly brutal patrol and looking forward to a desperately-needed rest, Kruger is instead given command of U-2317, the first of a new model boat with tremendous potential, but equally tremendous risk of disaster.

While much of the action in With Honour in Battle is made possible by the technological advances found in U-2317 and her weapons systems, most of them either already in service, or nearing deployment by early 1945, this is not a typical techno-thriller. The U-boat, and the British ships that are hunting her, are merely the setting. The heart of this novel is found in its characters.

Besides Kruger, there is Captain David Ralston, a bitter Royal Navy officer with an almost obsessive desire to track down and destroy U-2317, and Kapitän zur See Siegfried von Saltzman, a rotund, middle-aged staff officer with the aura of a non-entity and the mind of a tactical genius. U-2317 herself is populated with a fascinating collection of characters, from Wiegand, the executive officer, to Gerhard Ostler, the annoying—and barely competent—young Oberfänrich who is "political right through," and all the other diverse types who make up the hand-picked crew of this remarkable boat.